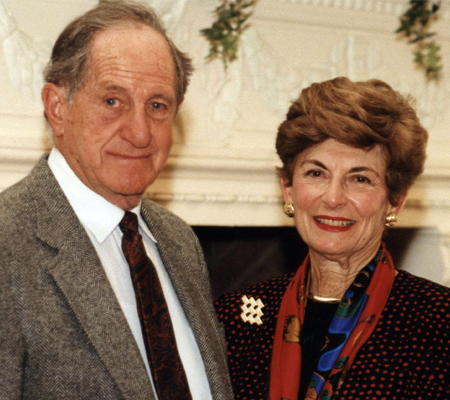 Doris and Bernard Gordon moved to York as newlyweds in 1947. Doris passed away in February 2015 and Bernard in 2011, but their bond and commitment to York County was always palpable to those who knew them. It came as no surprise when their son Robert established a named Fund for York County in their honor. Mr. and Mrs. Gordon, who were married for 63 years, were members of Ohev Sholom Congregation in York and each held various leadership positions within the congregation. Mrs. Gordon accomplished her dream and graduated Magna Cum Laude from York College in 1978. Shortly after graduation, she become a Trustee of the college. She served on many local boards and her involvement with the Jewish Community Center led to a groundbreaking program for Senior Adults, which she developed with her long-time friend and colleague, the late Gloria Williams. In 1994, Mrs. Gordon received the Betty Dressner Individual Achievement award from the JCC. Mr. Gordon served as a Carrier-based Aviator in the U.S. Navy during World War II. He went on to found The Gordon Waste Company in Columbia, PA. He was also Co-President of the former Super Salvage Company in Washington, D.C. Mr. Gordon was one of the founders of the York Youth Symphony and served as its Treasurer for 20 years and was involved with numerous other organizations. Despite their move to Florida in their later years, the Gordons’ son Robert knew his parents would appreciate giving back to York.